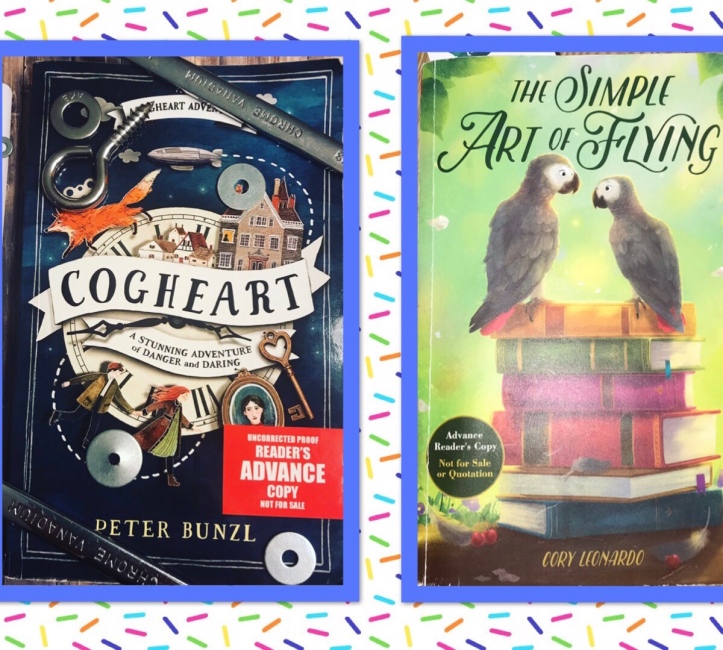 I reviewed ARCs of FOUR amazing middle grade books that released on my son’s birthday; that I’m breaking up into two posts .

I’ll start with the two that are “heavier” books, which can be a great foundation for serious discussions on age-appropriate moral issues and character-building.

THE SIMPLE ART OF FLYING is… narrated by an African grey parrot named Alastair. If that’s not enough to convince you this book is cool, he eats poetry books and plots an escape with his twin sister Aggie after both are bought by a zany elderly widow (Alastair) and a pre-pre-pre-med preteen (Aggie).

It’s a bittersweet book – Alastair needs to accept a not-ideal situation (namely, separated from his sister, with a human/cat/goldfish as his family unit, and living in a cage vs a tree). For all the talk about choices, sometimes the ideal situation isn’t an option. But Alastair does choose – grudgingly and after a few missteps – to find joy.

My book review is on Instagram . I got an ARC and and amazing debut author Cory to interact with me because I’m just that cool. Or possibly because a Kidlit Exchange partner. Either way, thanks Simon Kids!

The steampunk-meets-dystopian-meets-conspiracy-theory gem COGHEART is the first in a trilogy (hopefully will become a longer series) that appears to have been released all over the world. However, today it makes its US debut with Jolly Fish Press.

In 1896 London, society is stratified by not only class, but by humans, mechs, and hybrids. Twelve-year-old Lily Grantham is dragged out of hiding when her inventor father goes missing after a zeppelin crash. Lily, her pet mech fox Malkin, and her new friend Robert, are thrust into a life-or-death treasure hunt for Dr. Grantham’s fabled perpetual motion machine invention.

Without a spoiler alert, COGHEART has one of the biggest “gotcha” twists in my recent memory. It’s a good segway into discussions on bioethics, when to break promises, and the general gray area between right and wrong.

For both THE SIMPLE ART OF FLYING and COGHEART, I received the ARC on loan in exchange for an honest review.

Congrats to Cory and Peter (or should I say Alastair and Lily?) and welcome to the world THE SIMPLE ART OF FLYING and COGHEART!

This site uses Akismet to reduce spam. Learn how your comment data is processed.

I’m beyond excited and flattered to be a Panelist for the 2019 Cybils Awards. Early Readers and Chapter Books for the win!

Kid Lit Exchange is my main supplier of review copies and Internet friends.